It all begins with a decision. The decision to create a new generation of jet sweepers which is one of a kind in terms of functionality, operation, serviceability and design and which enthrals customers with a new, innovative overall solution. The primary focus was placed on questions such as how to make the maintenance easier for customers by improving the access to the battery, hydraulic unit or other internal components and how to enhance the memorability of the Schmidt product family with a new design.
The schedule for the new Schmidt CJS and TJS was quite tight. Within just 18 months, two new jet sweeper models – the compact CJS and the towed jet sweeper TJS – were implemented and presented to more than 220 guests as part of an event held on the premises of Salzburg Airport on 13 April.

More than 220 guests from all over the world followed the ASH Group’s invitation to join the expert conference in Salzburg, all of them professionals when it comes to the maintenance and safety of airport traffic areas. In addition to the trade show with Aebi and Schmidt vehicles, the participating partners DMi, Claas, Mercedes Benz, MAN, Vestergaard and Eastman also presented their airport winter service solutions. Yvonne Björnstrom (Management Swedavia AB), Richard Oakes (Winter Operations Manager, Heathrow Airport Ltd) and Stefano Dolci (SEA Milan-Malpensa Airport) provided exciting insights into daily airport routine as part of lectures addressing topics such as solutions to optimise the carbon footprint as well as the challenges of sustainable winter service – in the past and in the future. The highlights were the demonstration of vehicles on the apron of Salzburg Airport and the presentation of the two new Schmidt jet sweepers –

the compact CJS and the towed TJS. Finally, the participants of the expert conference had the opportunity to have a more in-depth discussion and bring the day to a close in hangar 7, home to the Flying Bulls, in front of a spectacular, impressive backdrop amidst aircraft rarities, helicopters and Formula 1 racers.

The schedule for the new Schmidt CJS and TJS was quite tight. Besides the new EuroMot 4 auxiliary engine, the adaptation to the new Euro 6 carrier vehicles and technical optimisations, the focus was also placed on the design of the new CJS and TJS generations.

“The design agency had a clearly defined assignment”, Theresia Winkler-Flügel, Product Manager for Airport Devices at Schmidt and manager of the technology project, recalls. “Firstly, the vehicle was to be redesigned to become fresher and more dynamic. With the design of the new CJS and TJS, we additionally wanted to initiate a component-sharing concept which can be transferred to other vehicles of the airport family at a later point. This is to enhance the memorability of our product family. At the same time, however, certain variables, such as better access to the battery, hydraulic unit or other internal components, had to be taken into account in order to make the maintenance easier for our customers. In addition, a new fan system now almost completely prevents fine snow particles from being drawn in. Last but not least, the question of the hood material had to be addressed.  Experienced designer Andreas Panik, Certificated Designer and Managing Director of Panik Ebner Design, played a major role in the redesign of the two models.

We asked ourselves various questions: How can the described needs be translated into the design? What creative means can be used to convey power and presence, drive and resilience, appeal and character? We take a very traditional approach in this process, using associative images from a wide range of areas to test and collect responses. Positive associations then need to be “translated” into shapes.

“Design is also how it works” Steve Jobs

Clemens Schwörer has also been involved in the development project in a leading capacity from the very beginning. He works for Schmidt as a design engineer in the field of snow clearance.

“In addition to the tight schedule, the greatest challenge in this project was the reconciliation of technical functionality and new design. The body had to be adapted to a new carrier vehicle, since the previous vehicle model, the Mercedes-Benz Actros Euro 5, was superseded by the new Mercedes-Benz Arocs Euro 6, with adaptation meaning in this case the total conversion of the carrier vehicles in terms of elevating the frame and the drive train to create space for the brush. We also had to turn a hand to the auxiliary engine to implement the currently valid EuroMot 4 emission standard. All in all, you could say that everything above the truck chassis has been redesigned and reconstructed”, the engineer recalls. “Another important aspect during the development phase was the question of the optimum material for the hood, which had previously consisted of aluminium sections. The old design allowed relatively little flexibility, in addition to involving the risk of corrosion resulting from aluminium reacting with certain de-icing materials. For this reason, we decided to use a four-part plastic hood made of GFRP. This not only permits a high level of flexibility as regards the design, but also enables us to optimise the component concept for the CJS and TJS.”

A success story – Jet sweepers from the Black Forest

In 1988, the first Schmidt CJS of its kind was developed and the first few vehicles were delivered to Frankfurt and Stuttgart Airport, where they are still in service today. In addition, the towed version of the jet sweeper, the Schmidt TJS (towed jet sweeper) was launched on the market in 2004. The automatic sweeping pattern adjustment by Schmidt was developed and patented in 1995. Moreover, the blower is now powered hydrostatically. Three years later, the CJS received a facelift – the CJS 914 Super II is launched. The sweeping unit is now 4,200 mm in length and 914 mm in diameter. The blower unit can be operated via a flap mechanism instead of the slewing mechanism. 2005 saw the redesign of the control panel. The new SPC control system is more intuitive, more user-friendly and is arranged ergonomically. It additionally features a colour display. Today, a total of more than 500 Schmidt CJS are in use, among them 119 at German airports, more than 100 in Russia, more than 70 in China and 49 at civil airports in Great Britain. About 30 CJS are in service for the UK Ministry of Defence. The southernmost CJS is found at RAF (Royal Air Force) Mount Pleasant Airport on the Falkland Islands. The small airport featuring two runways is an important base of the British Air Force and is simultaneously used in civil aviation.

In 2015, the CJS celebrated its anniversary when the 500th vehicle was delivered to Harbin Taiping International Airport in China. The success story of the Schmidt jet sweeper has been going on for nearly 30 years now. Customers all over the world appreciate the vehicles for their reliability and sturdiness as well as for their performance even at high operating speeds of up to 60 km/h.

A success story from the Black Forest goes around the world, with the development of a new generation of CJS and TJS again setting standards in 2016.

The vehicle demonstration and presentation of the new CJS and TJS was shown via live stream on the Internet. The recording is available online at http://www.aebi-schmidt.com/en/livestream

Watch more pictures from the event and the new jet sweepers: 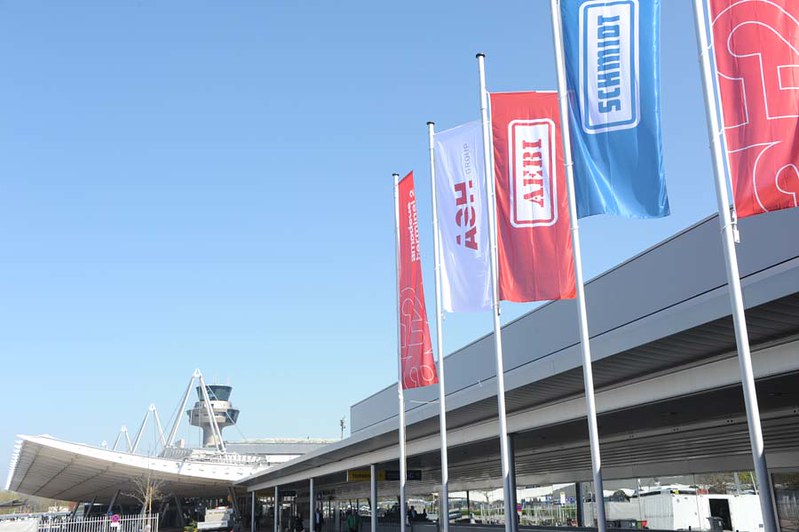