For decades, the Swingo models have been among the most popular and reliable sweepers when it comes to efficient and convenient sweeping in urban areas. Now Aebi Schmidt is offering a fully electric model under the name. The eSwingo 200+ works quietly and emission-free for up to 10 hours on a single battery charge. The first model recently made its way from the factory in St. Blasien in the Black Forest to the Swiss city of Thun – an epic journey!

For Aebi Schmidt, it was clear from the start that the first fully electric sweeper would only go into serial production when there was no compromise on performance in comparison to the Swingo 200+, the conventional diesel model. ‘We never doubted that it was possible, but even if a new drive technology provides the same performance, that requires both the manufacturer and the user to question and test existing processes,’ said Tobias Weissenrieder, who is responsible for product management and for research and development at the Aebi Schmidt Group. ‘The eSwingo 200+ repeatedly impressed in customer demonstrations during its development phase, confirming that it meets requirements in terms of reliability and sweeping performance. It can work for up to 10 hours without needing to be recharged and also has no problem handling challenging inclines,’ he added.

Aebi Schmidt has now followed up its claims and demonstrations with an unusual piece of proof. Rather than transporting the machine to the customer on a standard transportation truck as usual, the first eSwingo 200+ drove to its new owner under its own power – quietly and emission-free. On Thursday, 4th July, the planned two-stage journey began in the Black Forest. After customs at Waldshut, regular breaks, a visit to the depot at Aarau and an overnight stop at the factory in Burgdorf, the machine arrived in Thun on the morning of Friday 5th July, having travelled 191 km and climbed 621 metres in altitude. Overall, the journey lasted just over 10 hours. The total driving time was five hours. Weissenrieder said: ‘Driving this journey in the sweeper not only makes a small contribution toward our drive to reduce our carbon footprint; it also clearly demonstrates that customers can trust the performance of our eSwingo 200+.’

‘Air pollution control and noise reduction are becoming increasingly important for our customers. The eSwingo 200+ is a milestone in our product portfolio. Further alternative drive concepts will follow,’ added Barend Fruithof, CEO of the Aebi Schmidt Group, who tracked the start of the journey personally. Fruithof continued: ‘Today, we are handing over the first machine to the city of Thun. I am particularly proud of this, as is the entire Aebi Schmidt Group. Proud, above all, because we are able to help the city of Thun to achieve its ambitious goals and, more specifically, to make street cleaning more efficient. We wish the team in Thun happy and safe driving at all times.’

The city of Thun is one of the pioneers in the electrification of municipal fleets. In March 2018, for example, it became one of the first Swiss cities to introduce an electric vehicle for refuse collection. The eSwingo 200+, which will primarily be used in the mornings in the old town and residential areas, marks another stepping stone in the city’s electrification strategy.

The journey from St. Blasien to the customs post in Waldshut, then along the Rhine to Burgdorf and Thun via Laufenburg, Aarau, Olten and Aarburg, used 86% of the battery. That corresponds to CHF 15 in electricity costs and a saving of around 145 kg of CO2 in comparison with delivery by truck. The project team was able to track exactly where the vehicle was, what speed it was doing and the progress of the operating data. At one point in Aarau city centre, just for fun, the team also took the opportunity to lower the brushes and do some cleaning. The swept sections could also be tracked onscreen. When in use in the municipal area, this data enables optimisation of routes and deployment planning. To what extent data and the opportunities presented by technology can be used in the city of Thun is still under analysis. This analysis is focused on questions of data protection. ‘We have learned that customers have very varied requirements with regard to data protection and data security, and have designed the systems so that they can be flexibly adapted to these needs,’ said Weissenrieder. He was aided in the development process by the longstanding experience of data specialists who joined the Aebi Schmidt Group following the acquisition of a specialist company in 2015.

Urs Fahrni, an employee at the city of Thun municipal maintenance depot who drove the eSwingo 200+ from St. Blasien to his home town, was impressed by his new equipment. ‘We already use three Swingo models with a Euro 6C engine. Operating the eSwingo 200+ is similar, so no special training is necessary. Operating noise with the electric drive is close to silent, even at 50 km/h, which I find extremely pleasant, especially when you are out on the machine for the whole day.’ Of course, driving a sweeper for a distance of 191 km was also rather unusual for Fahrni. ‘I am very impressed by the performance and reliability and I look forward to being able to work with the machine in Thun,’ he said.

Learn more about our eSwingo an generation e on our Microsite. 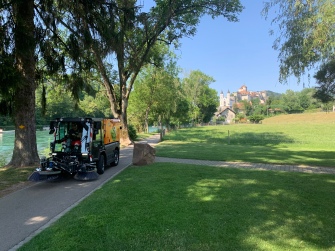 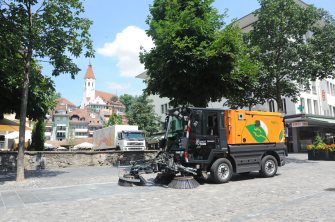 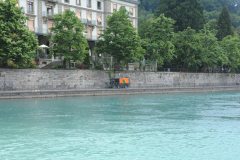 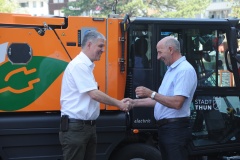