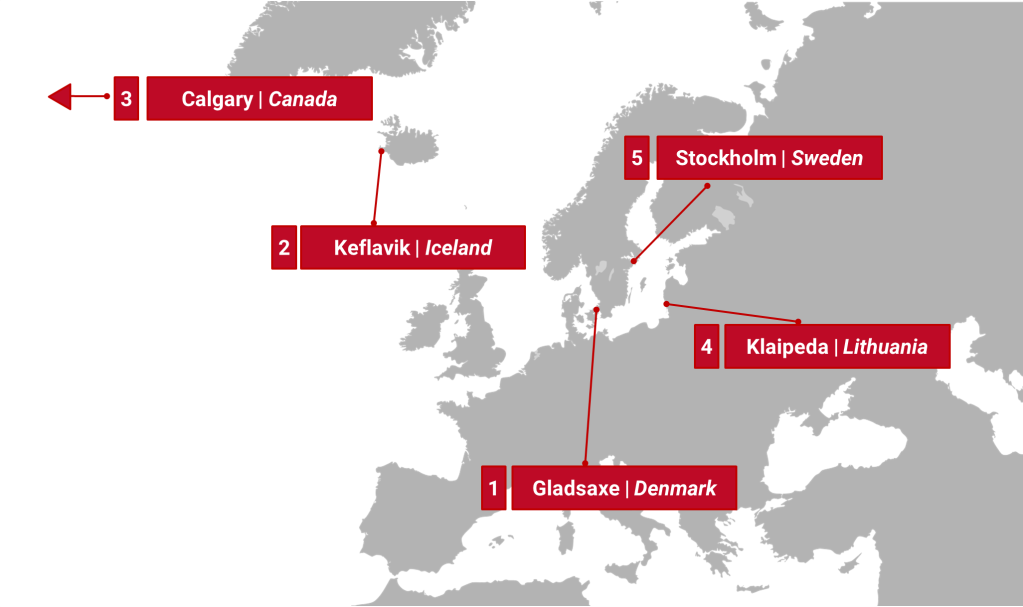 In the past weeks, the daily business continued in many cities, communities and also at airports, even under difficult conditions. In some places, Swingo, eSwingo, Cleango, SK 660 and TJS are ensuring that everyday tasks can now be performed even more efficiently. Here are four examples and one report on a special mission.

Gladsaxe (DK) – Emission-free is one thing, low noise and fine dust another
Gladsaxe is a Danish municipality with a population of about 70’000. The municipality is one of the world’s leading cities that, according to the rating of the Carbon Disclosure Project CDP, is proven to do the most for the climate. As of late, our eSwingo 200+ has also been helping to reduce emissions in the municipality. But that is not all. For the local transport minister, the benefits also include lower fine dust emissions and less noise for the population and drivers. We are pleased to accompany and support the Gladsaxe community on its exemplary path. More >>>

Keflavik (IS) – Where there is snow and ice, there is dirt and metal
Where there is snow and ice, we feel at home. For many years in Iceland either. Just two months ago, we received impressive pictures of a Stratos 3 spreader from the island state in the north. But Iceland offers more than snow and ice, and Aebi Schmidt does too. Most recently, a Schmidt mounted sweeper SK 660 on a Mercedes Benz Econic at Keflavik airport has been on the road on a special truck from Mercedes Benz – not only for sweeping, but also with permanent magnetic bars for removing foreign metal objects. Mercedes Benz presents the vehicle in Keflavik here.

Calgary (CA) – First TJS-C 630 arrived
Our frequent readers may remember the news from last autumn. We proudly announced that two Canadian airports had decided to use several TJS jet sweepers. The first TJS-C 630 arrived in Calgary on March 19. It is still on the trailer, but we do not want to withhold this beautiful example from you.

Klaipeda (LV) – A quartet for narrow streets and pavements
Klaipeda is a city with about 150,00e0 inhabitants on the Lithuanian Baltic coast. In recent years, the city has invested heavily in the expansion of its infrastructure, especially in roads. Now it is important to protect the investment, in other words: to keep the roads clean and well-maintained. The four “big” sweepers, which are mainly used on the large access roads to the port, are not suitable for cleaning the narrow streets and pavements. Therefore, the fleet has now been expanded. Three Swingo 200+ and one Cleango 500 will ensure that the sidewalks and narrow inner city streets in Klaipeda remain clean in the future. We thank you very much for the order! More >>>

Stockholm (SE) – Safe roads for once with a different meaning
Trygga” in Swedish means to save. “Trygga Vägar” are safe roads or just safe paths, depending on the perspective from which the project of the same name is viewed. The project was initiated by Svevia, one of Sweden’s largest construction and road maintenance companies. In cooperation with the City of Stockholm, “Trygga Vägar” is an initiative that aims primarily to give newly arrived and unemployed young people a future in the road industry. Within the framework of the project, 15 participants were recently also able to receive a diploma from Aebi Schmidt for a successfully completed sweeper training. Mette Engström, Managing Director of Aebi Schmidt Sweden, who offered the training with her team free of charge, enthused after the diploma presentation: “Sweeping roads has to be learned. But if the participants drive through the streets as motivated as they did during the training, we no longer need to worry about Stockholm’s cleanliness in the streets”. More >>>